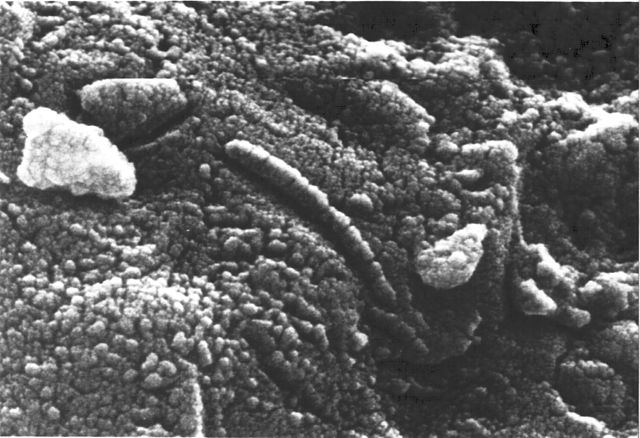 On August 1996, newspapers all over the world spreaded what could be one the single most important scientific news ever: The discovery of extraterrestrial life. Analysis of ALH84001, a meteorite that was found during an expedition to Antarctica in 1984, showed certain structures that had an uncanny resemblance with earthling bacteria, although much smaller. The meteorite was deduced to have martian origin, and to belong to very ancient geological strata, from a time when the red planet had liquid water flowing through its surface. Such discovery light up the hopes and fantasies of many, and the possibility of meteorites as a vehicle for the spread of life across the space found an appealing piece of evidence in ALH84001. However, later evidence pointed to an abiogenic origin of these structures, and all the hype faded away slowly and steady. 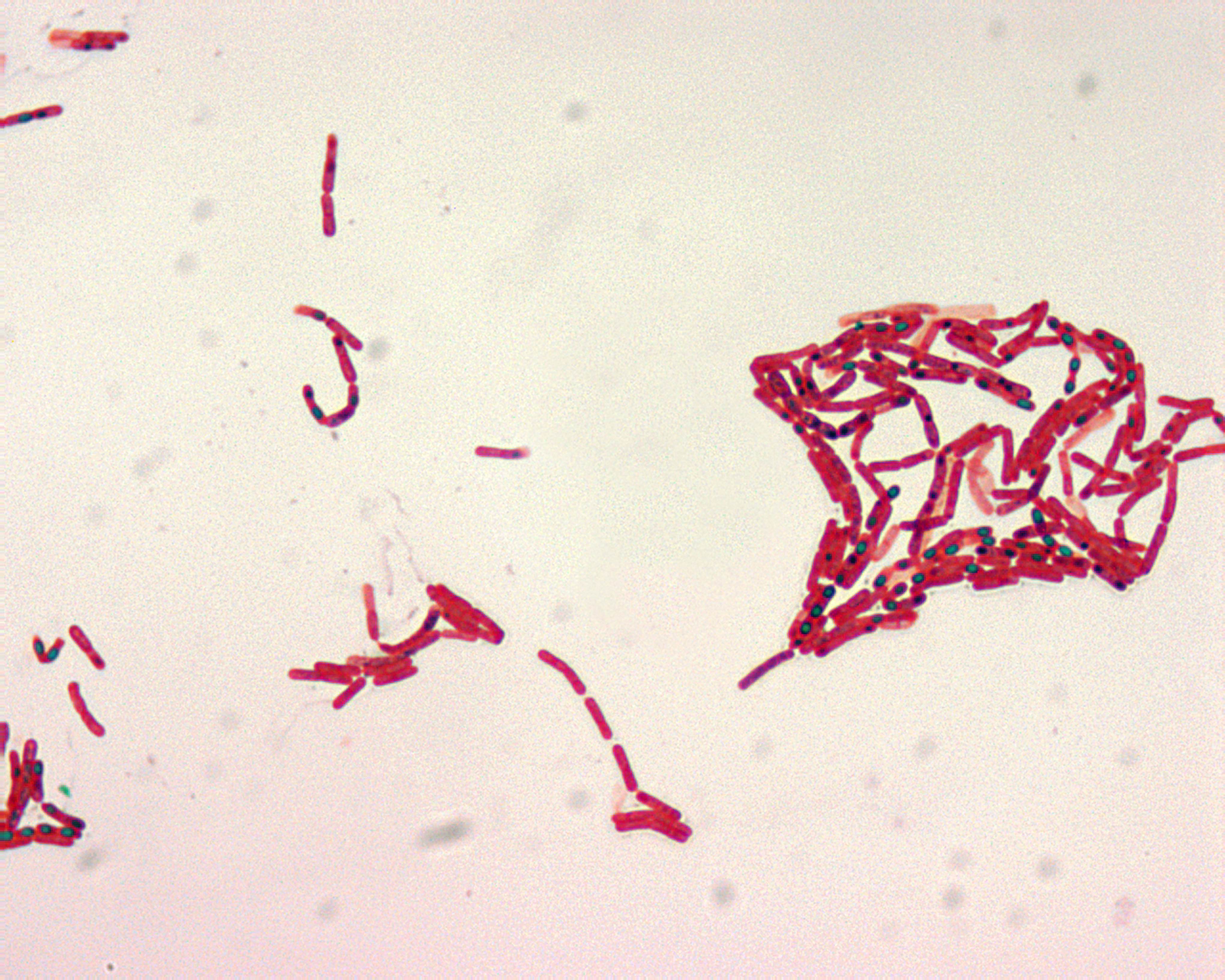 But even if this meteorite did not contain any traces of martian lifeforms, is it truly impossible for life, our beloved and more or less well known terrestrial life, to survive a meteoric trip to another planet? There are certain organisms that may turn the answer to that question into a rotund No. Many organisms can enter into states of low metabolic activity and great resilience to all kind of external damage, such as the dehydrated cryptobiotic states of certain nematodes, arthropods and tardigrades; resistance spores from fungi and protozoans, or the endospores from Bacillales and Costridiales. The later is without any doubt the sturdiest biological structure known, and, more importantly, many bacterial species across a huge range of enviromental conditions are able to use these amazing resistance forms. Bacillus, Clostridium, and related genus are part of the phyllum Firmicutes, and perhaps the best known members of the group. Both are gram positive bacteria with a rod-like shape. The main traditional difference between both genus is that Bacillus is aerobic while Clostridium is a strict anaerobe. Both genera show a great variability in their growth optima, metabolic capabilities and ecology. They are usually easy to isolate from the environment and many of them grow on simple culture media. Some Bacillus species are highly important for biotechnological and food industries, while Clostridium species are dangerous contaminants on water or food, infamous for their ability to produce deadly toxins. And again, thanks to the endospore, they can contaminate many substrates more efficiently, virtue of its almost supernatural ability to resist any kind of adverse condition. 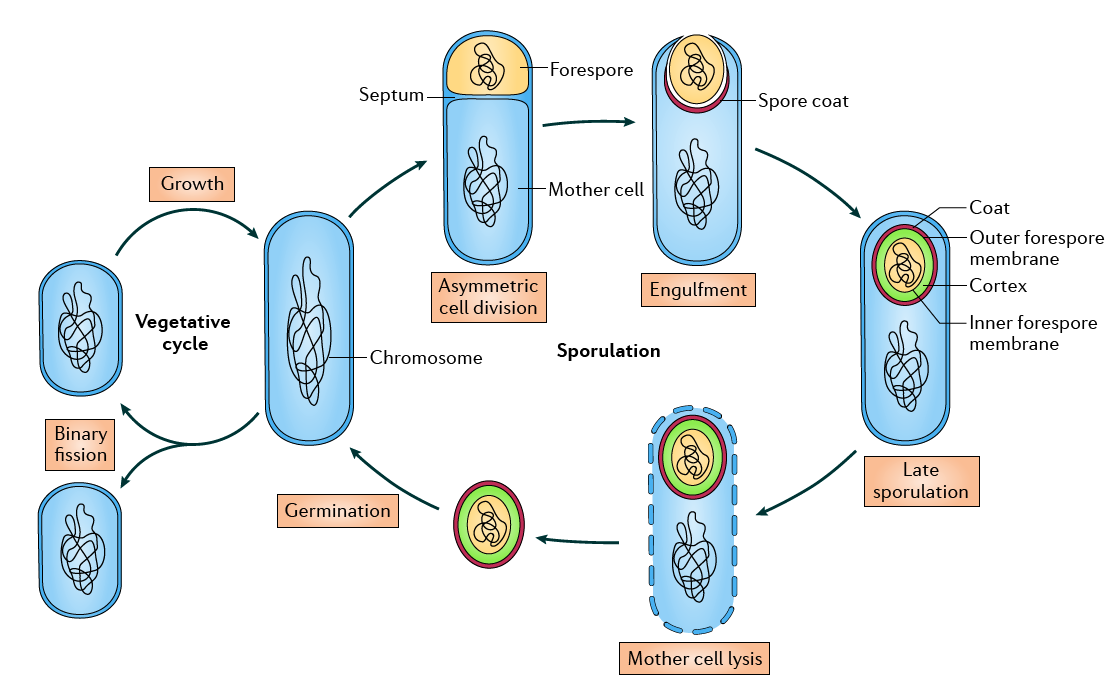 But what is so special about this particular kind of spore? The endospore is organized in several layers. The most external layer is called coat, a protective layer that acts as a physical barrier against damage as well as protecting the whole spore from radiation and oxidative stress thanks to its melanin-rich structure. Below that we find a concentrical layer of at least 70 different proteins called cortex, that acts both as a nutrient reservoir and as protective layer. The next layer we find is the inner forespore membrane, the remnants of the cell membrane that will regain its old function once the spore germinates. Finally, in the center of the spore we find the core, a solid structure that wraps the genome of the cell like porexpan. The core is highly dehydrated and rich in calcium dipicolinate, a nucleotide-derived organic salt that substitutes water molecules. Dipicolinate explains why the endospore can tolerate desiccation and extreme temperatures, and the solid nature of the substance also helps to repair the DNA chain when it’s broken in both strains, keeping both ends physically close like a plaster would do with a broken limb. In fact, the easiness of culture of Bacillus subtilis, as well as its natural ability to incorporate naked DNA into its genome from the environment, has made this bacteria an excellent model organism. Sporulation is one of the simplest cell differentiation processes known, and is a product of an asymmetrical cell division. Since sporulation is not essential for the cell, the whole process is genetically tractable. Thanks to this, the initial number of genes with a role in the whole sporulation process (~140) in the first version of the B. subtilis genome sequenced, has been expanded since then.

All this complexity explains why the distribution of the ability to form endospores is so narrow. We can observe it from our tree of the month - subunity A of dipicolinate synthase from Bacillus subtilis (Bacillus subtilis phylome). The enzyme is present exclusively in bacteria from Clostridiales and Bacillales, and no orthologs or distant homologs seem to be present in any other organism. Alongside the subunity B, that shares the same phylogenetic pattern, this enzyme catalyses the last step in the dipicolinate synthesis pathway, one of the secret ingredients of the unbreakable bacterial endospore.

Picture from the ALH84001 meteorite is of Public Domain

Picture from Bacillus endospores, stained with malachite green, is of Public Domain