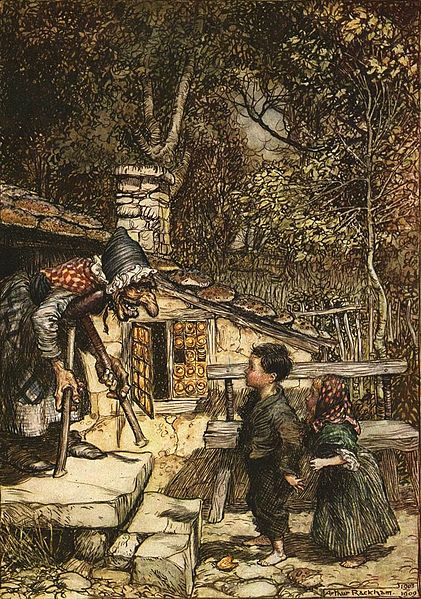 After being abandoned by their own parents in the middle of the forest, the young siblings’ ingenious plan for finding the way back home had failed miserably. The trail of crumbs that they left was eaten by the birds, and now the two kids feared for their demise. Lost, hungry and sad; brother and sister started to cry out of despair. Suddenly, a delicious scent caught their attention, invigorating their hopes and guiding their steps further into the woods. The pair walked for a while, with cramps in their legs and their stomachs, until they could see the source of the wonderful aroma. The source was a wonderful house with gingerbread walls, biscuit roof, candy windows and many other sugary marvels. Hungry as they were, the two kids rejoiced and proceeded to eat the house itself. And then, the door opened and the owner of the mysterious and delicious building, a really old woman with a smile as sweet as the rest of the place, glanced at them and offered a warm bed and as much food as they wanted.

Obviously I don’t need to tell the rest of the story. Hansel & Gretel is one of many folkloric fairy tales that was compiled by the Brothers Grimm at the beginning of the XIXth century, and one of the best known, too. While many of the details of the tale suggest that it originated during times of famine, such as the parents abandoning the kids in the forest or the cannibalistic hag; the most fantastic element of the story, the wonderful house built entirely from edible sweets has a universal appealing that makes it attractive for all times. People says that one can catch more flies with sugar than with vinegar; proving that the appealing of sweets is not just a human oddity. Sugar, or more specifically glucose, is at the axis of the energetic metabolism of virtually all living beings, and even those that are adapted to exploit other compounds as energy sources usually converts them into glucose at some point.

For our example we will use the baker’s yeast Saccharomyces cerevisiae. Like the heroes of the tale, the yeast is an avid consumer of sugar, having evolved to colonize the sweet juices of fruits. The biochemical pathway that it uses for that,  namely Embden-Meyerhoff-Parnas pathway, is the same as in humans. Actually, it is the same in the vast majority of life forms. It consists on a series of 10 reactions that transform glucose (6 carbons) into two molecules of pyruvate (3 carbons); producing in the process 2 molecules of ATP and 2 of NADH, both high-energy compounds used by the cell to fuel many biochemical processes.

Hexokinase is the first enzyme in the pathway in all of those organisms. It catalyzes the transference of a phosphate group from an ATP to a glucose, forming glucose-6-phosphate. This step allows to “remove” net glucose from the cytoplasmic medium, thus ensuring that an accumulation of free glucose does not hinder the entry of the sugar from the environment; as well as adding an electrical charge to the molecule that prevents it from leaking through the lipidic membrane. The highly energetic phosphate group is important for future reactions in the pathway, too. S. cerevisiae has three genes encoding for this enzyme, with different regulatory and enzymatic properties. Two of them, hexokinase-1 and hexokinase-2, have originated by a recent duplication event, as we can see in our tree of the month. Hexokinases have a varying degree of specificity over a great range of hexose sugars, which implies that they can easily duplicate over the course of evolution to adapt to novel nutrient sources. In the case of yeast, hexokinase-2 acts almost exclusively on glucose, while hexokinase-1 has a more relaxed specificity.

Hexokinase genes can be found in all domains of life, pinpointing the near universality of this metabolic pathway. However, “near universality” means there are some rebels that defy the rules. We will talk about them next month, in the second entry about glycolysis and the biochemical connection of all life. See you soon!